What a blessing to be the parents of twin newborn babies.   Such joy!   I am delighted to introduce you to Katie who brought her gorgeous twins to me to be photographed.  They were models for me as I was teaching a photography workshop for professional photographers on how to photograph twin newborn babies safely.   One boy, one girl – absolutely wonderful.

Here Katie talks with me about her experience as a first time mummy of twins.   This will be so helpful for any pregnant mother-to-be out there!

Katie! Thank you so much for joining me!    Tell our readers – what did it feel like to be told you were expecting twins?

Finding out you are pregnant is quite possibly the most surreal feeling.  Part of you is beyond excited,  you are growing an actual human inside you and are about to start a family.  The other part of you is in complete meltdown about what your future holds.  To then be told that actually, you’re not growing one baby but in fact two… well, I sobbed.  I couldn’t believe it.  I felt so incredibly lucky but at the same time, this was not the plan.  We dont have twins in the family, the radiographer must have it wrong.   Nope, she hadn’t!    I don’t think I have ever been so scared in my whole life!

Did you find out what gender they were going to be? If not, were you tempted?

When we found out the twins were non identical, Gareth and I made the decision to find out the gender.  Where there was that chance of having one of each was just too much.  I had to know!!!

How was the pregnancy overall?

I was incredibly sick for the first 4 months but it just seemed to be something I got use to.  Cheesy jacket potatoes and watermelons kept me going!  The end of the pregnancy was tricky.  I had become so big that everything ached.  Everyone tells you twins are going to come early but my two had absolutely no intention of budging!   My hips were incredibly sore, I had an awful itchy rash all over my body and walking made me out of breath!  Carrying two babies is tough going but you learn to just get on with it.

For the first 4 months anything to do with watermelon.  Whether it was the fruit or flavoured. I had to have it!

How was the birth?

I ended up having a planned section at almost 38 weeks.  I’d never been to hospital before so I was quite anxious.  We got there for 7 am and waited until 11.45am to go in.  Everyone was incredible and made me feel so at ease.  The section was a surreal experience.  I did all the research so I knew what to expect.   The twins arrived 12.07 and 12.09.   Millie was first weighing 8lb 3oz and Benjamin was second weighing 9lb.

We were a pound off the record for the heaviest combined weight of twins!  Due to their size, I bled fairly heavily and needed a few blood transfusions.  I dont remember much of this but once it was over it was like nothing had happened and I was wheeled out with my two babies.

I had to remain in hospital for 5 days due to the blood lost, so the first week I spent at my parents for extra support for Gareth and I.  Having two babies is tough but you will just get on with it and figure out the best way for you and your new family.  The one thing I wish I had listened to more is to accept all the help you are offered.  You don’t need to do it on your own.

I wish I had done this more and now, 9 months down the line, I have started to do it.  You don’t need to prove anything to anyone.  People think you are incredible enough. Remember, if you need help, ask for it. People dont know when you’re struggling unless you tell them.

What was your must have newborn essential for the twins?

The one thing I tell people who are having twins to get –  is the twin pillow.  You can use it for feeding, place them in it –  and now I use it if they are sitting up as we have wooden floors,  so it protects if they over balance.  Also, a tommee tippee prep machine if you are not breast feeding. You will be told that there hasn’t been enough evidence to show it’s safe but I dont know many people with twins that do not have one!

Did you buy anything you haven’t used?

There is so much you end up buying. Stuff you didnt even know existed. Before the twins arrived, we bought everything from new and to be fair, we did use everything but I would definitely advise buying second hand.  (Do not buy a second hand car seat or mattress). I don’t remember the last time I bought something new.  Whether its clothing or a jumperoo, look for second hand!!

Tell me about weaning? How have you found it?  Do Millie and Benjamin love any particular recipe of yours?

I found weaning very stressful to begin with  You feel like you just get the hang of bottle feeding and timings and then all of sudden, that’s not enough.   I fully expected my twins to wean at the same time but they didn’t.  Millie was ready at 4 and half months and I tried Benjamin but he just wasn’t at the same point so he didnt start till 6 months (NHS advises waiting to 6 months).   I started Millie on veggie pouches ,and fruit ones and then we moved on to porridge and then at 6 months I started finger foods.

Millie was really easy to wean and would eat anything but Benjamin was a whole different ball game.  Very fussy and refused anything savoury but I persisted and he now will pretty much eat most things.  They both love fritters.  There are so many recipes online but they are so easy to make.

I love @whatmummymakes on Instagram. Her recipes are suitable for babies from 6 months and so easy to follow.  Here is my favourite and the twins love them!

Mix it all together and then drop small amount of mixture into a frying pan with a little oil and fry on each side till brown. Even I love them!

I’ve seen those fritters on your instagram!  They look delicious and I might make them myself!  Do you have a  “must have” kitchen gadget?

A handheld blender!!! My mum gave it to me a few months ago and it’s so much easier to whizz up what Gareth and I have eaten for the babies.

Do you see an obvious closeness between the twins? What do they do that makes you thing “awwwwww”…

At about 6 months the twins started to realise each other were there. After they have their bedtime milk they tend to chat and giggle with each other now which melts my heart. Benjamin will reach out for Millie if she is crying which is so so lovely! Benjamin is incredibly laid back and smiley, not matter who you are, he will smile at you!  Millie is a lot more curious about the world around her – and likes to get her own way!  She is a lot more wary of people she doesn’t know.

Katie thank you so much!  There is some really invaluable advice here, particularly about asking for help if you feel you need it.   I do think there is a lot of pressure on mothers – but everybody loves to help – so as Katie says – ask for it if you can.

Here are Millie and Benjamin photographed by me as newborn babies – weren’t they just the cutest!!! 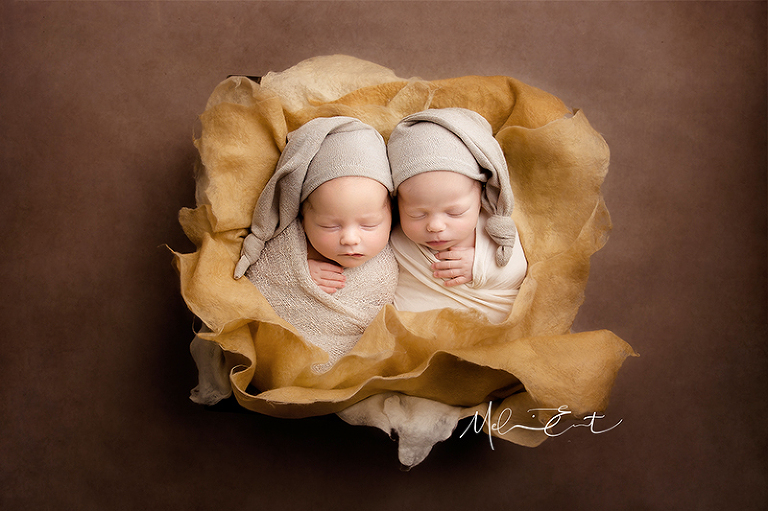